Demonstrate your scholarly/professional recognition to your institution 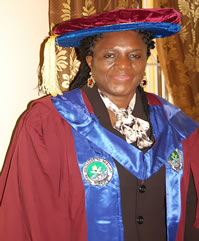 
Dr. (Mrs.) Philippa Isioma Oganwu started her Primary Education at St. Louis Primary School, Kano and completed it in Ifeyinwa Primary School, Onitsha Ugbo in Delta State. She later obtained her WASC and NCE from Olomina Girls Grammar School, Onitsha-Olona in 1977 and Alvan Ikoku College of Education in 1984 respectively.  Thereafter, she served the mandatory one year NYSC with the Nigerian Army at Bukavu Barracks, Kano in 1984. In 1985, she proceeded to Obafemi Awolowo University, Ile-Ife where she bagged her degree B. Ed in Social Studies with Second Class Honours (Upper Division) in 1988.

As a manifestation of a rare zeal for academics, between 1997 and 2003, Dr. Oganwu completed her Masterâ€™s and Ph. D degrees at the Delta State University, Abraka, Nigeria.

Dr. (Mrs.) Oganwuâ€™s rise in her academic career is an evidence of integrity, dedication and steadfastness.  She joined the services of the College of Education, Warri in 1990 as a Lecturer III in the Department of Social Studies, and through dint of hard-work and commitment, she rose to the rank of a Chief Lecturer in 2005.

Dr. (Mrs.) Oganwu is a Rotary Ann and a Paul Harris Fellow.  Passionate in sporting activities, she was a Gold medalist in Hockey in 1972 in Bendel Sports Festival.  Besides, she is determined to champion the course of vulnerable children and women; and it is this passionate spirit that birthed her NGO, Society for Women Empowerment and Protection (SWEP)

She is happily married to Barrister Patrick Eziashi Oganwu and they are blessed with three lovely children.

Dr. (Mrs.) Philippa Oganwu has also served in several committees as Chairman and member. These include: College Scoring and Evaluation Committee, Research and Publication, Space Allocation, Admission Board, DELSU and UNIPORT Governing Boards, Desk Officer, College of Education, Warri among others.